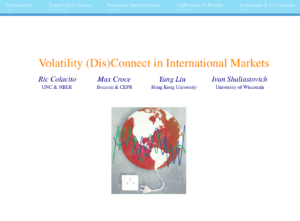 Lack of co-movement between consumption growth differentials and real exchange rates is a traditional indicator of a disconnect of foreign exchange markets from economic fundamentals (Backus-Smith 1993 anomaly). We present novel evidence for the (dis)connect between the volatilities, as opposed to the levels, of these variables. The volatility correlations are below one, but they are larger than the level correlations. In the cross-section of countries, the volatility disconnect weakens for countries with low amount of expected growth risk and high amount of volatility risk. We provide an explanation of our empirical findings based on international risk-sharing of both expected growth and volatility news shocks. (with M. Croce, Yang Liu, and Ivan Shaliastovich) Latest update: 1/2022 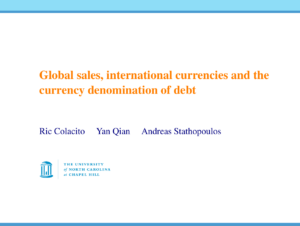 Global sales, international currencies and the currency denomination of debt

We document that the currency denomination of the debt of developed country firms is strongly related to the geographical distribution of their sales. On average, a unit increase in the percentage of sales in a country is associated with an equivalent increase in the proportion of debt denominated in the corresponding currency. Consistent with the existence of fixed costs of debt issuance, we find that the relationship between the currency denomination of debt and the geography of sales vanishes below the 5% threshold for sales. Finally, we document significant home currency bias and international currency bias in debt issuance. In particular, we show that, controlling for the geography of sales, firms issue more debt denominated in their home currency and the two most traded currencies, the US dollar and the euro. (with Y. Qian and A. Stathopoulos) Latest update: 3/2021 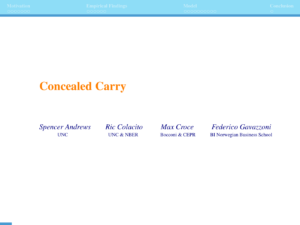 The slope carry consists of taking a long (short) position in the long-term bonds of countries with steeper (flatter) yield curves. The traditional carry is a long (short) position in countries with high (low) short-term rates. We document that: (i) the slope carry risk premium is negative (positive) in the pre (post) 2008 period, whereas it is concealed over longer samples; (ii) the traditional carry risk premium is lower post-2008; and (iii) there has been a sharp decline in expected global growth and global inflation post-2008. We connect these empirical findings through an equilibrium model in which investors price news shocks, financial markets are complete, and countries feature heterogeneous exposure to news shocks about both global output expected growth and global inflation. (with S. Andrews, M. Croce, F. Gavazzoni) Latest update: 5/2021 We characterize an international trading scheme based on entropy risk-sharing. In our frictionless general equilibrium model, two international consumers with preferences for robustness trade both two consumption goods and a complete set of date- and state-contingent securities. Consumption home bias and concern for the temporal distribution of entropy generate rich endogenous dynamics for high moments of both international prices and quantities. (with Max Croce). Latest draft: 2/2015. Someone Likes it Skewed: an Experimental Analysis of Skewness and Risk Aversion

We modify the multiple price listing design of Holt and Laury (2002) to study the trade-off between expected payoff and payoff’s skewness. We find that our subjects are equally split between those that are and those that are not averse to negative skewness, despite the fact that they all display risk aversion in the standard Holt and Laury (2002) treatment. We estimate the parameters of a power-expo utility function only on the subset of subjects, whose behavior across treatments is consistent with this functional form and find that relative risk aversion can be twice as large as what is typically found in these experiments. (with Bassi and Fulghieri)

Six Anomalies looking for a model. When agents have a preference for the timing of the resolution of uncertainty the presence of a low frequency component in the dynamics of consumption growth can account for a number of anomalies including the Backus and Smith puzzle and the high correlation of stock markets given the almost absence of correlation in the fundamentals. The introduction of stochastic volatility allows also to resolve the forward rate premium anomaly, providing a unified framework to study international finance puzzles. Latest draft: 1/2009.

Colacito and Croce (2006) study the dynamics of the growth rate of the real exchange rate, when the preferences of the representative consumers in the two countries are defined only over the domestic good and characterized by non-time separability a la Epstein and Zin (1989). This paper shows that an equilibrium of this economy exists in which exchange rates are well defined and it can be interpreted as the limiting case of an economy in which preferences are defined over both domestic and foreign goods. This note was originated as a response to a number of people that questioned the existence of an exchange rate in the absence of trade.